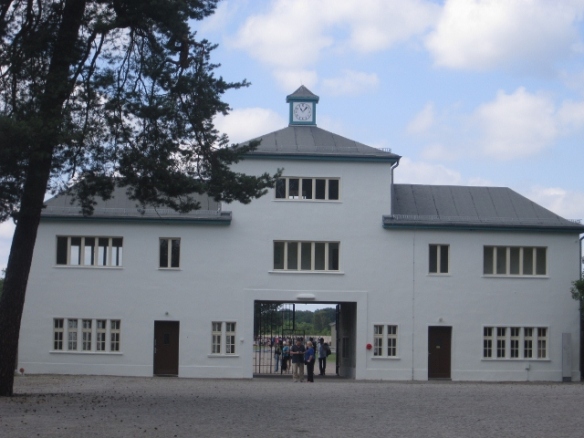 Sachsenhausen Concentration Camp is just outside of Berlin. What sets it apart from the others is that after the war it continued to be used to house Soviet Prisoners of War. It is now open as a memorial/museum.

Only a few of the buildings remained, but the size of the place was quite astounding – it was absolutely massive. When we arrived we all got audio guides, which were quite essential as most of the sites are simply an outline on the ground of what used to be there. There was so much information on the guide – you could spend all day listening to it. There was a lot to learn about what life was like, how many people were crammed in, and some of the horrible things that went on. For instance, I learned that there was a specially created running track, where prisoners who were being punished above and beyond the norm were sent to test the durability of shoes for the military by running around and around in circles and over different types of terrain until the shoes were worn out.

The camp was primarily a work camp, with gas chambers only added later. They manufactured a great deal of furniture there, which lead me to wonder how far/wide the products of concentration camps spread around Germany and the rest of Europe, You would have to be so careful if you were buying antique furniture, for example, because it would be hard to know just how many lives were lost in the production of your chest of drawers.

There was also a quite horrific account of some young Polish boys who were infected with hepatitis, and subject to a number of test to determine the symptoms, including having a liver biopsy taken with no painkillers or anesthetic.

The audioguides were great, and quite necessary in a place like that, though I did feel that the information overload (it was all very factual) depersonalised the experience a bit, compared to a later visit to Anne Frank House, where you got a real sense of just how much the war affected the individual.

On learning about prisoner’s arrivals to the camp, and the ordeal they went through (including the “Sachsenhausen Salute” whereby prisoners were forced to squat on their knees with their arms outstretched for hours on end. If they faltered slightly they would be beaten), the thing that got me the most was that so many of the soldiers in the lower ranks seemed to take such delight in abusing the prisoners. It is easy to accept that Hitler, Goebbels et al were horrible and absolutely crazy for orchestrating such atrocities, but a concentration camp of that size requires such a huge amount of administration, and so many staff/soldiers to run it. Given the accounts of their behaviour I don’t think it is at all possible to say they were (all) just following orders or that they had their own consequences to be fearful of.

In contrast, however, there were a few touches of hope and humanity throughout, particularly in the basement of the kitchen were prisoners had to prepare vegetables. The walls had some amazing murals painted on them, so I assume there was a bit more down time for them there, and a bit less supervision. 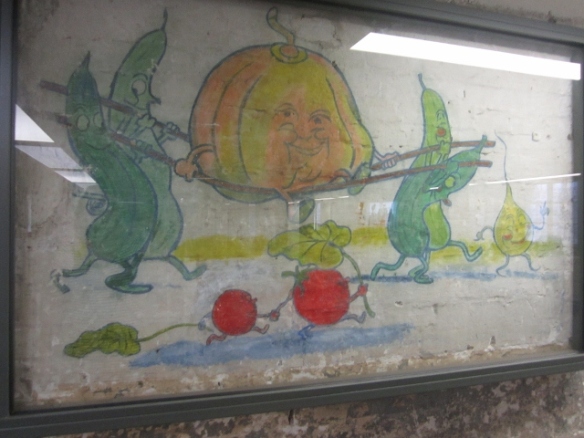 Entrance to the memorial site/information centre

Birds eye display of the site of the camp

Photos from the “Death March”

Photos displayed on the path towards the camp entrance

Roll call area. Prisoners had to attend for the roll call three times daily, often standing for hours in the snow, and doing the “Sachsenhausen Salute”

Site of one of the many barracks

Former workshop where furniture was manufactured

Bathroom of the barracks, where hundreds would have to get in an wash themselves in the space of 15 minutes in the morning

Bathroom of the barracks, where hundreds would have to get in an wash themselves in the space of 15 minutes in the morning

Original uniform, found in one of the museum sections

Inside one of the barracks

Entrance to the prison

One of the cells of the prison, where those deemed the worst of the lot were taken

Large wash basin in the kitchen cellar for washing potatoes. Prisoners were often randomly picked out and held under the water as a form of torture

Memorial at the site of the gas chamber

Site of the gas chambers

Site of the gas chambers