Skansen was a definite highlight of the Stockholm trip. Skansen is a large open air museum/zoo on the island of Djurgården. I’m growing quite fond of outdoor museums, and this one really had it all! From stone age farmsteads, the King’s holiday home to a zoo of Scandinavian animals. It was all very exciting.

A Norwegian hut, from back when Sweden owned Norway

The Scandinavian animals were great – first time I’d ever seen a moose or a reindeer. There was an owl that looked both hungover and disappointed, elks, otters, seals and grizzly beers. Lucky for me they had just recently come out of hibernation.

Not to worry Margaret, I found that disappointed owl.

As I looked in to the beer enclosure I couldn’t help but think of just how often the phrase “don’t poke the bear” has come in to my mind whilst travelling Scandinavia. In both Denmark and Sweden, I get the feeling they are very proud of their welfare system here. In Denmark income tax is 68%, 60% in Sweden, and in return (in Denmark at least) they get free healthcare and there are a lot of benefits available to almost anyone that needs them. The result of that, is that in my experience, Danes and Swedes are incredibly judgemental of homeless people. The viewpoint is that there is no reason for anyone to be homeless – the welfare system that people pay through their teeth for is so good that anyone that is still on the streets is generally a drunk/drug addict or mentally ill and refusing help. The argument is that they are there by choice. Certainly every homeless person I have ever come across has been either ludicrously drunk or crazy – many of them yelling at passengers on the bus, or continuing to ramble at me no matter how many times I tell them I don’t speak Danish/Swedish and don’t understand them. Often other people will argue back to them, and I’ve even witnessed a few hobo fights. My philosophy in these situations is always “don’t poke the beer” – if someone is clearly of questionable state of mind, making them angry is never going to work out well!

And so I found myself at a zoo, thinking about politics and economics. SUCH a nerd. 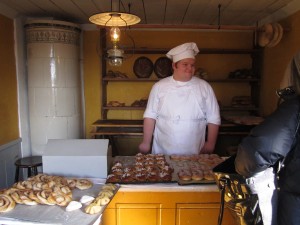 The rest of Skansen was really interesting too – like Den Gamble By in Aarhus there were a number of shops and homes with actors, from bakeries where you could by old style baked goods to a glass blowing factory. There were also stunning views of the rest of Stockholm in a few of the spots. Skansen was huge and there was a lot to see. Sadly, once again I was a victim of the pitfalls of winter travel – there is usually a huge market area with stalls that are open, but there was still plenty to see. Definitely allow plenty of time if you visit Skansen. It is also a really nice walk on the way there.

First racoon I have ever seen!

A Norwegian hut, from back when Sweden owned Norway

For a second there I thought I was in “The Village”

Not really sure what was meant to be in here, but I had fun climbing up a rockwall trying to find out!

The longest cigar on the world!

Not to worry Margaret, I found a disappointed owl.

Amazing views of Stockholm from Skansen