Not gonna lie, we had a very brief period of time there so I didn’t get to see much, but wandering around the city was quite fun, with lots of bavarian looking buildings, and important looking business people in fancy cars.

Stumbling across a bunch of surfers in the middle of an inner city park surely is a perplexing site, but most entertaining. Especially as most of them were really talented – there is even a sign that reads: “Due to the forceful current, the wave is suitable for skilled and experienced surfers only”

I realise the name essentially has ‘sour’ in it, but for some reason I had always imaged sauerkraut was sour in the pickle sense. Otherwise surely it would just be gross? Sour cabbage? 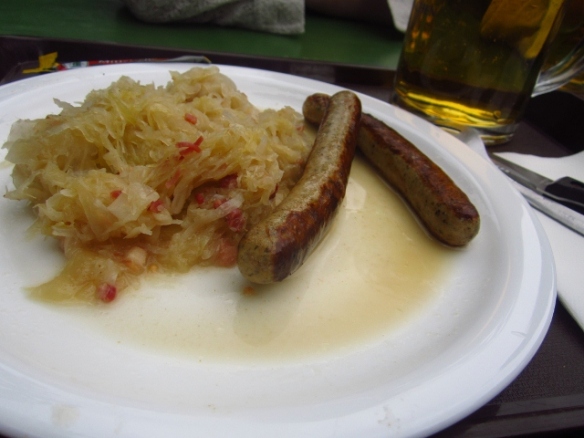 Englischer Garten was a really beautiful, incredibly green, and HUGE park in the middle of town. It actually took us about 40min to walk through it to find the Chinesischer Turm Beer Garden!

In Englischer Garten we found ourselves at the “Chinesischer Turm” (Chinese Tower), the second largest beer garden in Munich.

The history of the Beer Garden, so I’m told, is that brewers were only allowed to brew in winter (in the early 19th century). In order to keep their beer cool for sale in summer, they stored it in cellars along the river Isar under the shade of the trees. These areas soon became popular drinking spots, and a law was enacted in 1812 to allow/encourage the sale of food, thus bringing to life the beer garden.

Whilst there are self service beer/food kiosks at the beer gardens, you can actually bring your own food/drink and have a wee picnic at the tables.

At the Chinesischer Turm, named after the Chinese Tower in the middle (which is actually modelled on the “Great Pagoda” in the Royal Botanic Gardens in London), we were delighted by an Omm-pah band as well as a lovely leafy green area full of tables and chairs, and a little self service kiosk full of Hofbrau beer and bretzels, among other famed (clichéd?) German delicacies.

And more and more of it.