A huge book/movie sensation, The Girl With The Dragon Tattoo has certainly drawn a lot of attention to Stockholm, and for some, put the city on the map. I’d read (most of) the books and seen one of the Swedish versions of the film franchise, so I thought I’d see what this tour business is all about.

Not many modern books are so precise and specific with their real life locations and addresses, so it is easy to see why tour providers in Stockholm have begun to capitalise on the franchise. However, being a 23 year old in 2012, there’s no way I’m paying for some tour when I can just do a quick google search and find the info myself. Larry and Sergey certainly provided, with numerous pages giving lists of addresses, and this particular one picked out some highlights in Sodermalm, all very close together. I must say I’m not that great a fan, but thought it could be a novel way to wander about the area. I also thought it might be a nice way to help my parents live vicariously through my adventures, as they are pretty big fans of the books, and Dad had already emailed me to ask if I’d seen the locations!

Given that the books are about rapists and murders, I figured there was no better way to wander about the locations than alone at night. Don’t worry mum, it was actually only 6pm and on the way to tracking down dinner! 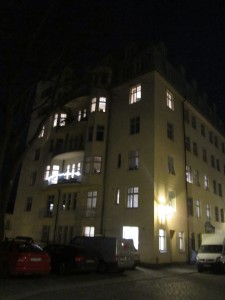 The first stop was the ‘million dollar/kroner’ apartment Lisbeth bought with the money she extorted from the caregiver that assaulted her. Actually took a wee while to find, but it seems housing in that area has all value in the location. NIce view, though. After that I headed done and past the 7-11 where she apparently lived off a diet of microwave pizzas. She must have had the metabolism of a marathon runner to also fit the book’s description of being skinny to the point of having the body of a child. At this second location, It really confirmed how ridiculous it would be  to pay anyone for this tour – a 7-11 being in the top 7 sites. Next stop was the bar she apparently hungs out with her emo lesbian friends. Turns out it isn’t really a bar at all but a German style restaurant. Not that exciting. 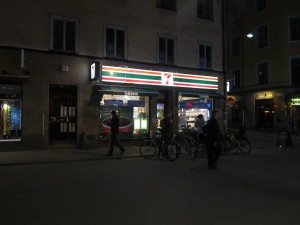 "The" 7-11 apparently. Because there aren't a million of them all over town.

Turns out Kvarnen is a restaurant, not a gothic lesbian hangout as the book suggests

On the way back through from Helsinki I found myself with a few hours to spare in Sodermalm from 7am-10am (nothing was open until 10) so I continued the rest of my adventure. As it turned out, I had been snapping away at the buildings around where Blomkvist was meant to live on the way to “The View.” In a particularly hilly street, these tall old buildings had bridges connecting the tops of them. Very cool.

After wondering around with my pack for a tad too long, Melqvist Kafe, supposedly where Stieg Larsson did a lot of his writing. It happened to be one of few places open and had a really good breakfast deal, so I wandered inside. It had a very cool seating area, but I have no idea how he would have acheived anything, as the tables were all benches or coffee tables… Wrote some emails there though, just to get in the spirit! Just call me the next Stieg!

Apparently there is actually someone by the name of Blomkvist living there. I felt like waaaay too much of a creep to go find out

Someone met someone at this cafe... or something...