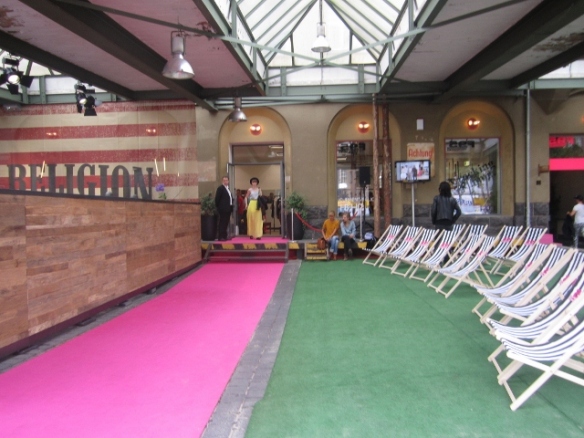 Whilst hunting down a train station to head off and do some sightseeing we stumbled across one of the Berlin Fashion Week locations, which was kicking off the very next day. The catwalks were having the finishing touches applied – some seemed to be cutting it very fine, still applying layers of paint the day before (MAC, I’m looking at you); others were already cracking into the champagne (Armani).

We spied an entrance to the showroom for commercial buyers which had a very convenient lack of security, and wandered straight in. A lot of people were buzzing around, hopping out of taxis straight from the airport, frantically setting up, dressed quite casually being the set up day, and roughly our age, so we slipped right in unnoticed. We were also aided by the fact that all the really fashionable types were FAR too cool to wear their ID lanyards.

It was quite fun to stroll around the stands set up to attract commercial buyers – they were so elaborately designed! From one that was set up to look like a beach (sand and everything) to another in an old double decker bus and some beautiful displays of the clothes and shoes, it was rather quite entertaining. I wish I could have taken more photos, but that would definitely have given the game away.

Final lesson of the day was to brace yourselves for an onslaught of pastel coloured jeans, shoes, chinos, shirts, everything. There was just so much pastel. 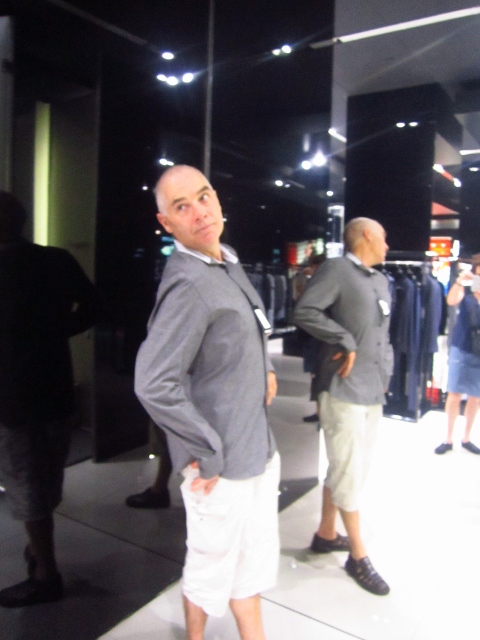 Is that Georgio Armani? Wait, no it’s Dad

The highlight of the day in Milan as most definitely the Armani Flagship store on Via Manzoni. The clothes weren’t so much the clincher – the only thing I wanted to try on was a ludicrous velour tracksuit, but Mum wasn’t keen after we got told off for trying to take photos. Instead, the highlight was the cafe in the store. We started there for a coffee, and the winner was most definitely an Iced Coffee with Amaretto – like the most amazing espresso martini I have ever had, only so much better. The Amaretto addition was a winner. 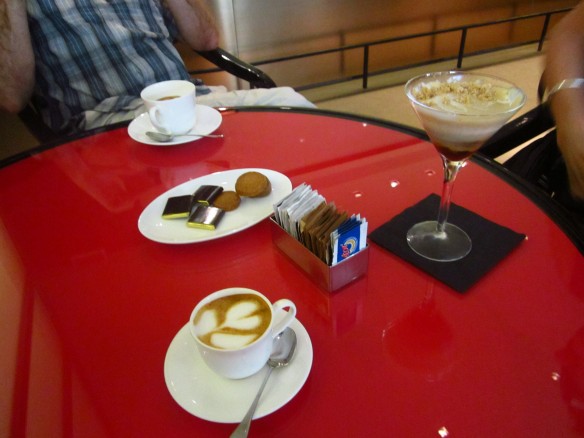 After that we perused the store for a while, and with everything so far out of my backpacker budget (and quite frankly I didn’t find any of it worthy of the price tags), we decided to kit Dad out with a nice new shirt. With shop assistant numero uno running rings around us, and shop assistant numero dos banished because he was one of those weird “I-work-in-customer-service-but-I’m-too-cool-to-serve-customers” types we were in business. Once my Father’s two fashion consultants picked him out a nice shirt it was back to the cafe for lunch. The best dish was the Calamari, but they had some tasty club sandwiches too. It wasn’t too unreasonably priced, and provided an excellent spot for people watching whilst feeling like we were far too special. 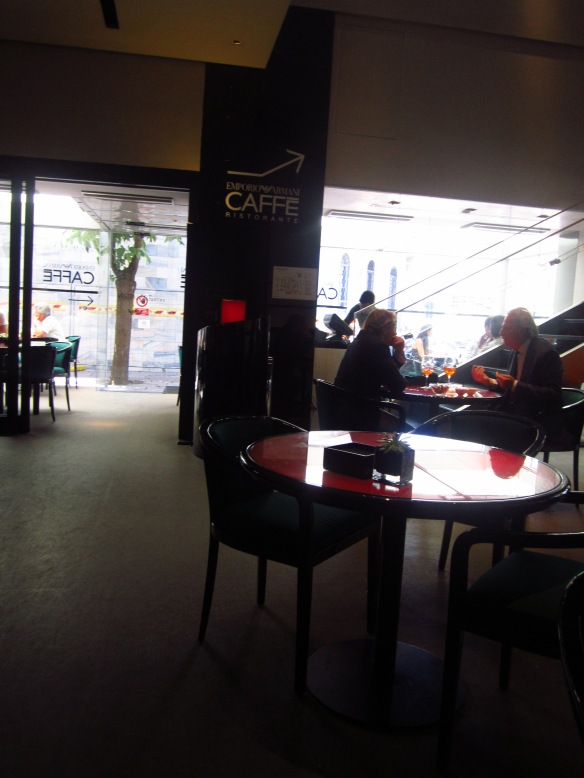 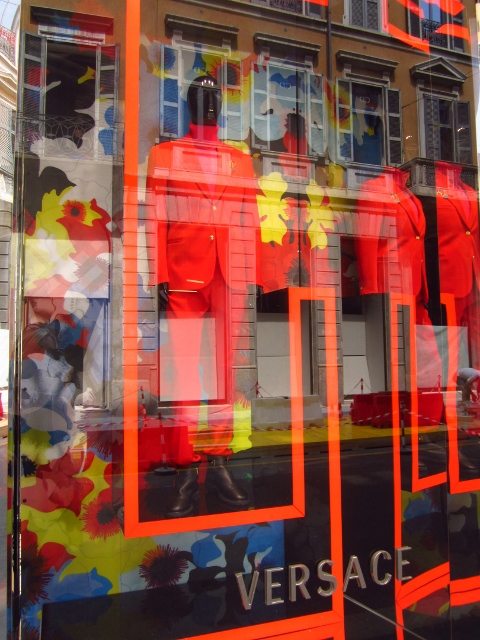 Ever since I was a wee young’n, Dad has always joked when one of his daughter’s has bought something new that it looked like it was “straight from the catwalk’s of Milan.” He had quite the way of making it sound extra patronsising as he said it, and it has since been a bit of a family joke. Sortof like in The Castle, where the father is always saying “You could sell that” when his wife cooks a meal.

So extreme hilarity was to be had when sure enough Dad found himself shopping in Milan with his wife and one of his daughters!

It was absurd just how expensive some of the items were. After poking my nose in to almost all of the big name stores, I am thoroughly convinced that Italian fashion is just not my thing. Most of the Italian labels, from Armani to Gucci, where just so incredibly tacky it was hard to believe it was “fashion.” After seeing so many identical bags, but for the different letters of each major label, or the amount of items of clothing covered in diamantes and other sparkly shit, I’m just so glad I come from a country where “wearing your money” (as you would with these labels) is really not something that gets much approval. Except maybe in Ponsonby, but to be honest, the rest of New Zealand really wouldn’t mind if Australia took Auckland.

I did really enjoy the Ralph Lauren store, though. It was like a museum – filled with beautiful art, and set up like an amazing house. The polo shirts seem like a very plane item jazzed up on the basis of a logo, but the womenswear was beautiful, and you could tell it was high quality and very flattering styles.

As I walked through these stores (at one stage overhearing a man saying “only €1200? I’ll take it!), I begun to think to myself, with every item: “If it didn’t have a designer label, would I wear it?” and at least 80% of the time the answer was no. Some things are just outragously ugly, but because I famous designer made it, well, it’s high fashion and high price. It really makes me wonder if it is this secret ironic joke where top designers are saying “How ridiculous can we make this item and still get people to pay ludicrous amounts?” A bright red suit with a bright pink turtleneck (in the window at Versace) was my favourite example of this. Sadly, I don’t think that’s the secret motive of the fashion world.

Nonetheless, it was fun to go to all of those stores and see what the fuss is all about, and I really hope that no matter how much money I may or may not make in future, that I will never be buying ridiculously priced crap that looks good on no-one just because someone said it is fashion.

Scandinavians and facial hair… an entire topic in itself for someone from New Zealand. I must say, I do enjoy how when boys have facial hair in this part of the world, it is a whole lot more styled and well kept than kiwi boys. Even the ones going for the ‘Thor’ look (long blonde hair + long blonde beard) seem to look far more styled.

I also really enjoy that no-one is doing that stupid ‘ironic moustache’ thing. It’s no longer different and ironic when everyone is doing it so I don’t really understand how it became a trend at all. I mean, the gave Stanley Tucci a moustache like that in “The Lovely Bones” for a reason. In case my implication isn’t clear, its because he played a rapist. It really is beyoned my why any boy would want to look like a peadophile, but hey, it seems to be on the way out, thank God.

Of all the nicely trimmed stubble, or manly-yet-still-stylish (important in a country where people look a lot younger than they really are) beards, or the Finnish guys with hilariously comical beards the absolute hands down winner has to be this guy, spotted in Helsinki: 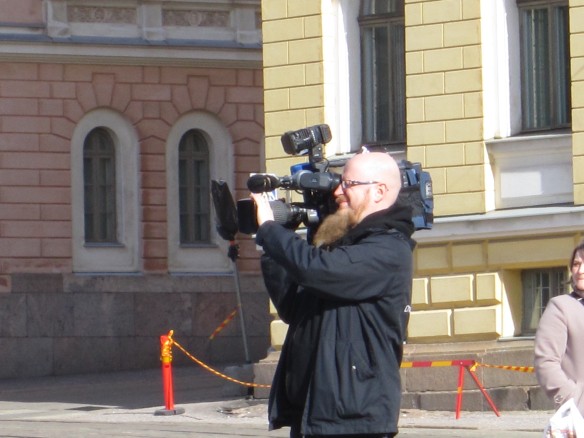