We managed to have yet another travel disaster when we first attempted to leave Barcelona. On arrival at the airport, the lines were so long with half of Britain going on their budget holidays to Spanish beaches (think “The Inbetweeners”). There were two Ryanair checkout counters for about 6 flights, and despite being there 2 hours before checkin closed, the lines were so long that they closed it before we could check in. You can only imagine how fuming mad I was. And I wasn’t alone. There was a huge amount of angry yelling in Spanish and plenty of tears going on around us as others had their holidays ruined. The only remote attempt at a remedy was being given a fax number for Ryanair HQ in Dublin, also very infuriating. Who even uses a fax machine these days anyway?!

And so we were forced to camp out at Barcelona airport for about 12 hours waiting for a flight. There was barely any seating, as we couldn’t check in for 10 hours so had to wait near the desks, and no plugs anywhere either. We eventually found one behind a vending machine and entertained ourselves with gossip magazines, West Wing episodes and chocolate from the gift shop. When this got old, we built a fort out of our bags and a couple of airport trolleys. Mostly to hide ourselves from security as we definitely weren’t meant to be sitting there, but really wanted to charge our phones and laptops! After about 8 hours this is what we looked like:

Finally, we were able to get to Gran Canaria (not quite the right Island) where we able to travel to Fuerteventura in this tiny plane, which also doubles as the newspaper delivery vehicle:

Luckily I got a second crack at it, a whirlwind tour not proving quite enough. Until then, here’s my photos from the first time around. 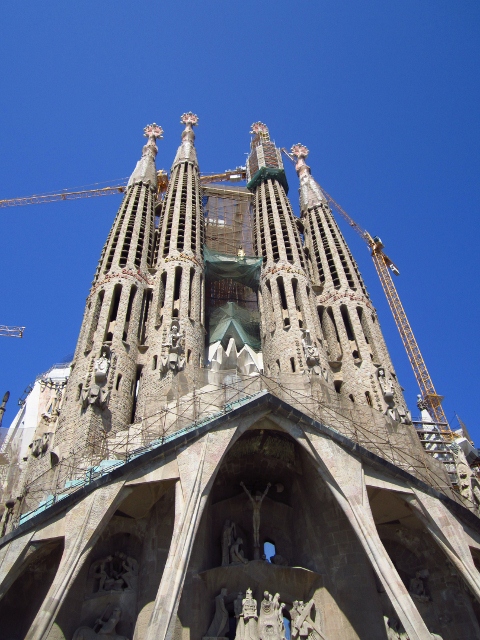 The Sagrada Familia is one of the most famous Cathedlrals in Europe, and certainly one of the highlights of Barcelona. This fact makes it all the more fascinating that it remains unfinished! Essentially, Antoni Gaudi’s masterpiece was such an impressive feat, requiring so much funding that not only was it not finished before he died, but the mission to attract enough donations to complete it is still  as going on.

This minor detail, however, does not detract from the magnificence of it, particularly was as the interior has mostly been completed. Gaudi was famous for revolutionising architecture by instead focusing on organic forms inspired particularly by plants but also by animals. This is reflected all throughout the Sagrada Familia, from tree trunk like pillars at the main entrance to the lizards climbing around the outside. This was another tourist attraction where the audio guide really made the entire thing that much more fascinating, as well as the museum exhibit detailing his inspriation. Below the church, there were examples of his models. I particularly liked how although the overall structure is based on completely symmetrical shapes (namely weighted, hanging chains and viewing them in a mirror in order to get perfectly symmetrical arches), the details of the cathedral are not at all symmetrical. Looking up to your left will give a very different view to your right, not to mention each facade of the exterior is totally different.

Gaudi absolutely won at stained glass windows too, with the sunlight making the most amazing light show inside. 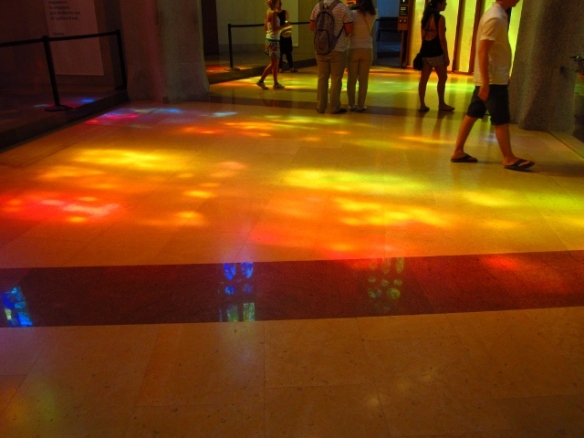 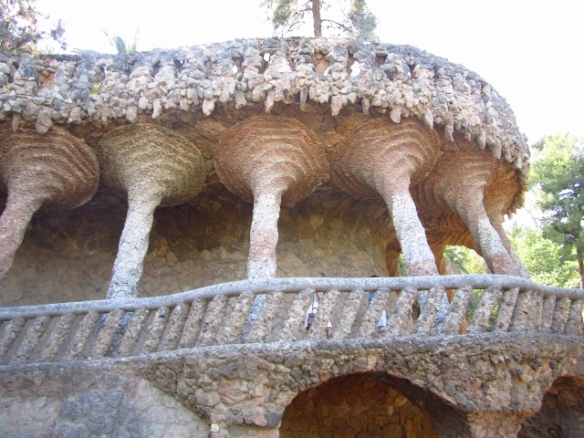 Parc Guell was absolutely my favourite place in Barcelona. Designed by my now favourite architect (not that I had one before, but that’s unimportant) Antoni Gaudi.  Gaudi was fairly outrageous in his day for abandoning all the rules and creating structures inspired by organic forms, but eventually the craze caught on and was copied all over Barcelona. Although his pièce de résistance was the Sagrada Familia, the Parc Guell is a really fun, quirky and different place to explore, not to mention its fabulous views. I particularly enjoyed not only wandering through and taking it all in, but being able to round a corner and see an entirely new and different creation. Continual amazement!

I was quite excited about trying proper Spanish empanadas, coz, well, pies are delicious, and Spanish food sounds all very excited. I have to say I was rather let down by Spanish food, including my empanada. Whilst it was a pretty looking wee pie, it was really quite average. And it seemd for the most part spanish food was just baguettes with spanish-y sounding meat in them. AKA nothing exciting. Still though, that’s a bucket list food item done I guess…

Having only really been built up and redone for the Barcelona Olympics, one of the cities (now) hotspots is fairly modern looking, with all kinds of crazy shaped buildings and recycled materials, and a weird giant lobster.

Minus the lobster, the vibe of the area kindof reminded me of the Wellington waterfront. It was also my first glimpse of the Mediterranean which was exciting.

OK so we didn’t actually make it inside the museum, it was hot, and we were trying to cram a huge amount in to one day. But this spot deserves a mention for its amazing views out over the city, with buskers seranding you with Spanish guitars while you stand there in awe. It is also situated on the Montjuïc hill looking out over the Place Espanya and its magical fountain which makes for very good viewing, and behind (or more, to the left) is all the leftover olympic structures including a crazy weird tower. 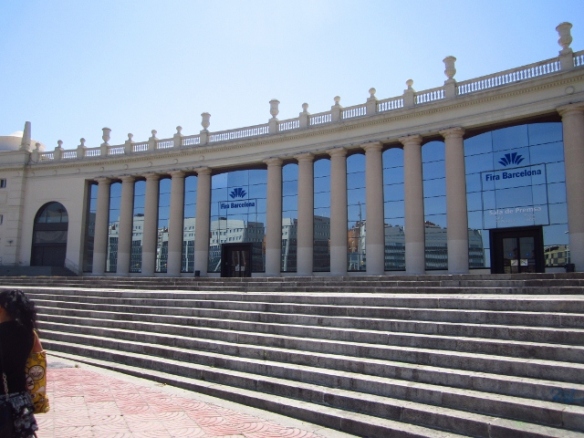 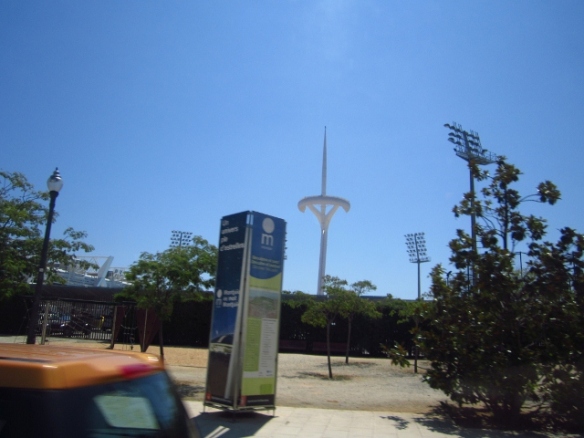 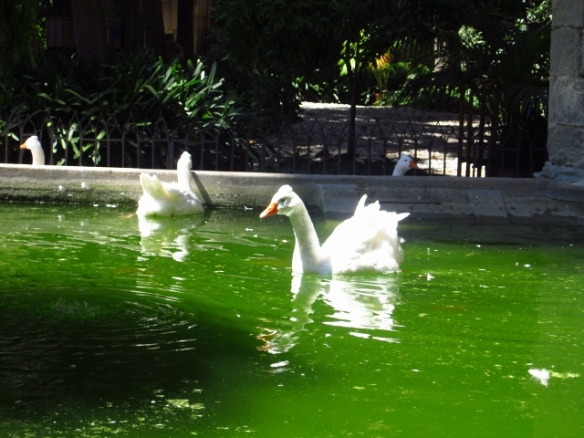 When you say “Cathedral” and “Barcelona”, most people automatically think of the Sagrada Familia. The Cathedral of the Holy Cross and Saint Eulalia, however, was almost as magnificent (I only say almost, because the Sagrada Familia really is quite mind blowing). It is a gothic masterpiece, shining in all its Catholic glory, both on the gargoyle laden exterior and the gold covered, stained glass window filled interior. Whilst going up to the roof and looking out over Barcelona was fairly magical, the best bit by far was the courtyard in the middle with a pond full of swans. It seems no extravagance is spared in this building! It was only a shame they had electric offeratoy candles and coin-stampy vending machines cheapening the entire affair. Gaudi’s workshop immediately outside was handy, though!

From my previous encounters with language learning, most places I had been to thus far (except Prague, but it was very tourist friendly) provided at worst fairly guessable signs, menus and transportation and at best I could fully communicate. Not so when it came to spanish. On our first go at dining out in Spain (hampered of course by the siesta culture – who knew it was so much more than a cultural stereotype) we thought we were about to have a delightful spanish culinary experience. Instead: steak and chips and a tuna salad. Fail! 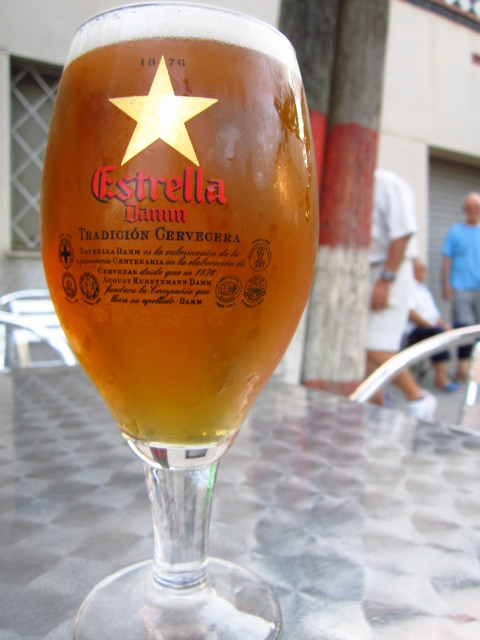 On arrival in Barcelona, after a massive and much needed sleep (airport benches are not that comfortable, it turns out) we went for a wander to find some food and drink. We were actually staying at an airport hotel just out of Barcelona which was a very good balance of cheap + comfortable, compared to an inner city hostel, and it had free shuttles into the city. I’m officially converted to the ways of airport hotels! The downside was being in the middle of an industrial area. About a 30min walk away was a wee town? suburb? I’m not quite sure, called Viladecans, where we found a great selection of tapas bars. Being in the middle of nowehere it wasn’t at all watered down and touristy, and as well as being super cheap (€1.60 for a beer + tapas!) we were later delighted by the locals who bought their guitars along to provide their own entertainment. So with a much needed drink in hand, I sampled my first Spanish beer to the tune of some local music and had some delicious pre dinner snacks (which was lucky, because nowhere served food until after 9pm).