One of the boys was particularly keen on a club we’d had recommended to us, which goes by the name of Berghain. From what we had been told, it was one of the biggest dance clubs in Berlin, but once it made it into the Lonely Planet (a “must do” in Berlin), the locals, staff and owners were really unimpressed about it becoming a watered down tourist destination. So we had been told it was quite exclusive, but who gets in and who doesn’t is somewhat arbitrary (apart from those looking overly touristy). It wasn’t too far from the area we were going to head out to on a Saturday night, so we thought we would give it a go. It didn’t open until midnight, but there was a garden bar next door where we sat down and had a quite drink. All of a sudden, at about a quarter past 12 (because no-one wanted to be the first one at the party) the garden bar cleared out and there was a giant line to get in. As we got closer to the door, we saw the bouncers look everyone up and down and either point silently inside, or point toward the exit. Definitely no discernible pattern.

About 20-25 people immediately before us were all straight denied, but we got quite excited when we managed to pass the look up and down test. Then the bouncers said something in German, we gave a confused look and were given the point-toward-the-exit. It seems our advice of “you probably won’t get in without a local with you” held true.

We were a bit too busy playing it cool to get any photos, but I definitely regret not taking a picture of what appeared to be the owner of the club – possibly the most hilarious person I have ever seen. He was this overweight, fake tanned, much older man with long grey hair, sunglasses on (at night), loads of piercings, but the best bit was he was squeezed in to these tiny leather pants, and had a very small studded leather vest, not at all covering his large, grey-haired pot belly. And yet he STILL thought he was the coolest thing since sliced bread. I bet in the eighties he was king of the Berlin techno club scene, but it is just plain awkward and unfortunate now!

*Update*  –  a wee google search provided a photo of the guy in question. Turns out he is one of the bouncers, although when I was there he was swanning in and out barely doing any work… I guess that means he is a “supervisor” these days. Apparently he is a wee bit famous for being all tough and scary looking. I personally still maintain he was the one of the more ridiculous people I have seen of late. And I’m travelling Europe so that’s really saying something. 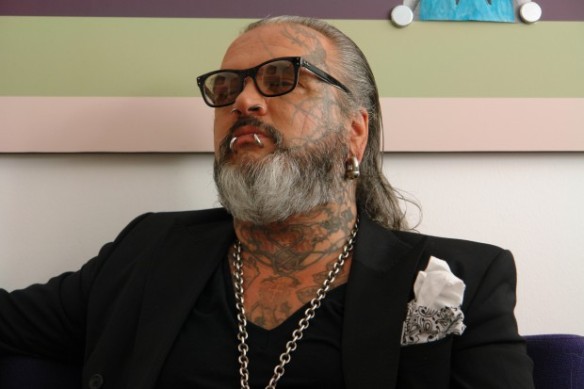